Throughout my life, I have consistently heard my mother discuss the importance of choosing your battles wisely.  She seemed to always be referring to my selection of clothing (which if I recall correctly, my fashion sense at 6 years old was trendy and fashion forward— side pony tails and stirrup pants were cool, right?).

And, as a parent of a 2 year old, I have lots (and lots) of opportunities to choose my battles on a daily basis.  This morning, for instance, Noah refused to eat his breakfast and stood in the kitchen pouting and stomping his feet.  Currently, Matt and I are fully engrossed in the “ignore the tantrum” phase of discipline but, when you’re trying to get him ready for preschool and yourself ready for work, there is only so much time you can “ignore the tantrum.”

After about 5 minutes of ignoring the pouting and stomping, I walked calmly in the kitchen, knelt down on my knees, and asked him if he was ready to eat his breakfast.  He looked up with tear-filled eyes and said, “Mommy, I need poons.”  I tried to hide my giggles as I opened the silverware drawer and watched him gather all 9 of the baby spoons in his tiny, fat fist and run into the living room yelling, “Look Daddy!  Poons!”

We then spent about 15 minutes longer than usual watching him eat his french toast sticks with 9 different rubber-tipped spoons.  This was not a battle I wanted to fight.  And, not fighting this battle (although time consuming and covered in syrup) made for some really cute and really developmentally friendly conversation with a toddler.  He was proud of himself for figuring out how to do it.  I was proud of him for knowing what he wanted and making it happen.  And the dogs were more than happy to clean up the syrupy mess.

This was the battle this morning.  The past few weeks, I have chosen not to worry about the fact that sometimes, he wants to wear socks (and often, more than 1 pair at a time) with his sandals to school.  If he sees a hat, he has to put it on.  Even if it is 90 degrees outside and he finds a winter toboggan in the drawer, it goes on his head for the rest of the day.  The child sometimes goes a week without getting his hair washed because he cries to the point of vomiting when a little water gets in his eyes.  He insists on wearing at least 2 Batman Band-Aids on his legs at all times and we have to watch Pitch Perfect at least once a day, sometimes more (I think we have probably seen it 42 times- and counting). 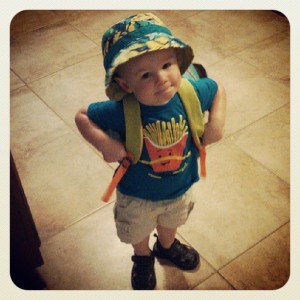 But, he eats his vegetables, he uses his words (most of the time) when he wants something, he hugs and snuggles, and he plays and plays until his head gets sweaty.  Yes, he refuses to let us brush his teeth for more than like 5 seconds, but he is one happy little boy.

So what if he’s the smelly kid every now and then!?

I am going to save up my battles for when they count.  Not sure which battles I’ll choose.  We stand firm on a few- holding mommy or daddy’s hand in the parking lot, staying buckled in the cart at the grocery store, you know, safety stuff.

But everything else is just Noah trying to figure out how to be Noah.  Yes, tonight I will have to wash 9 spoons, cue up Pitch Perfect on the DVR, and get out 2 new Batman Band-Aids, but, in the long run, who cares.  Plus, it is really funny to watch him dance and sing to “Turn the Beat Around”—especially when he’s wearing 3 pairs of socks.