I really wish I hadn’t taken for granted the days, long ago, when Matt and I could go to the beach, bathe in the sun, drink beer while we relax in the sand, and totally zone out/nap while we wait for the waves to roll up on our toes.

Now… we have Noah.

The beach is a very different experience with an almost 3 year old boy.  First, if we want to enjoy our vacation as well as bring Noah along on our trip, we have to bring reinforcements.  No more do we get romantic getaways.  We get family vacations with parents and in-laws because, as we have learned in Noah’s short life, there can never be too many adult eyes on him.

Our beach vacation started each day with Noah waking up at 6am asking to “go see the ocean.”  By this he means, wake everyone up in the house, screw putting on a bathing suit or eating breakfast, let’s go, now!

Matt and I would spend an hour convincing him that the “ocean didn’t open until 9am” and Granny and Grampy aren’t allowed to get up before 7am.  We were forced to watch horrible television like Little Einsteins (which makes me want to poke my eyes out) while Noah asked every 30 seconds, “Is it 7 yet?”

Once Noah was finally allowed to wake everyone up, we shoved breakfast in him, I chugged a cup of coffee, and the long process of getting ready begins.

First, Matt and I get our bathing suits and sunscreen on while Noah shouts, “Hey!  Watch me!” and then he does some awkward jump or dance or something that he thinks is amazing.

Second, once we are totally, 100% ready (as we know we have to be because as soon as Noah is ready, there will be very little time before a meltdown ensues), we get Noah’s suit on.  He is very particular about his clothes so this process probably takes much longer than it should as he only has 3 or 4 suits to choose from (Dinosaurs or sharks?  Green or orange?  I don’t like this one, change it.  This one pulls funny.  This one has a weird tag. Etc.).

Third, here comes the sunscreen.  And even though we put sunscreen on this child every single morning before school, and school puts sunscreen on him every single afternoon after nap, this is a fight.  Noah is lucky enough to have the whitest of white genes from his mother.  Noah’s skin is so incredibly fair that it is almost translucent.  I don’t trust the spray for the initial application so Matt has to hold him down while I lather him with 50+ sensitive skin sunscreen.  I get kicked in the face a few times, he yanks and pulls my hair and my bathing suit (exposing more than my in-laws care to see I am sure), and then he complains for 5 minutes that I got sunscreen in his eyes.  I do use the spray sunscreen for the cowlick on his head.  I put a hat on him and rummage around for his beach flip flops.

Are we ready to go to the beach yet?  Of course not.  Now, I have to get the cooler ready.  Is it full of beer and tequila?  Of course not.  It has juice boxes, popsicles, bottled water, and fruit snacks.  I then make a separate bag with crackers, pretzels, chips, cookies, and anything else I think he may have an instant craving for (I really don’t want to risk having to go back to the house just for a granola bar).  I then shove a diaper in there (because he still refuses to poop in the potty), lots of wash cloths, towels, more sunscreen, sunglasses, and another hat in case the one he is wearing gets wet or lost.

Are we ready to go to the beach yet?  Well, Noah and I are.  Matt still has to carry all of the beach chairs down (that we won’t sit in until Noah takes a nap back at the house), beach blankets, shovels, rakes, buckets, dinosaur shapes, shark toys, umbrellas, and toy trucks.

Now- we are all at the beach!  If you could possibly close your eyes and imagine what pure happiness looks like, it would be Noah playing on the beach.

He went on missions to find other places to dig holes.

He jumped in puddles (so much that his suit would get loose and little chubby butt-cheeks would poke out… then I’d have to put sunscreen on them). 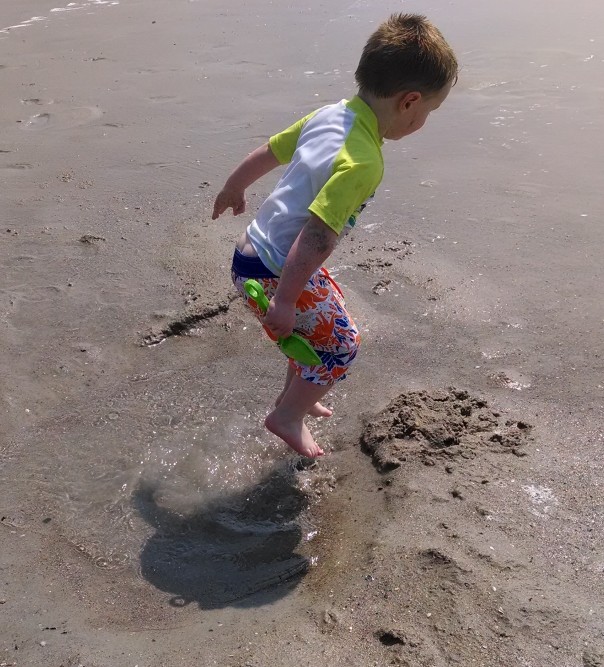 He fought the ocean.  And I mean punched, kicked, stomped every wave that came up to him.  As the waves would start to break he would yell, “Come on ocean!  Let’s fight!”  Then he would handle business.

And then, when he couldn’t run, fight, dig, kick or throw any more, he would make his way to the beach blanket, grab a juice box and a snack, and rest.

And then we would start all over again.  For 7 days straight.