I will be the first one to tell you that I am not perfect, Matt and I are not perfect parents, and Noah is certainly not a perfect child.  He’s pretty awesome, but far from perfect.  Currently, as all two year olds do, he is testing his boundaries, exploring his world, and learning how to relate to others and communicate by watching and mimicking the other kids and adults in his life.

With that said, Matt and I have had to learn to be super conscious about our behaviors and our words at all times.  And, while we have failed many, many times, I think we are doing a pretty good job at modeling good behaviors, using our words to communicate emotions and needs, and practicing lots of appropriate behaviors in hopes that Noah will mimic the good stuff.

[At least I thought we were doing a pretty good job.]

This morning, we were running a little late and, when Noah asked for seconds of his breakfast, we just didn’t have time to make that happen.  So, after he was dressed and ready for school, I asked him if he would like a cup of cereal to have in the car.  Here is the gist of the conversation that followed.

Me: “Noah, do you want Cheerios in a cup to eat in the car?”

Me: “Okay, okay… here are your Teddy Grahams.  Just be sure not to let the doggies get them.”

Noah immediately and (I am assuming) accidentally drops one on the floor.  Poplar, our voraciously hungry Black Lab, dives in and gobbles it up without even chewing.  And then it happened…

Matt: “I think we should ignore it and just hope it doesn’t happen again.  But I think I have heard him say it before.”

[But wait… this amazing morning couldn’t possibly get worse or make me feel more like a terrible parent could it???]

I get to Noah’s classroom, give him a big hug and kiss, and wave good-bye as he runs off to grab a toy and play next to his best friend Abigail.

One of his teachers comes up to me and, in a whisper tone, asks me if she can have a word with me.  She informs me that Noah has been saying “shit” quite a bit for the last week or so when he gets frustrated.  She said he will even clinch his fat little fists and stomp around in a circle saying, “shit, shit, shit.”

Seriously!?  My precious little Noah??  He’s the kid that cusses?? 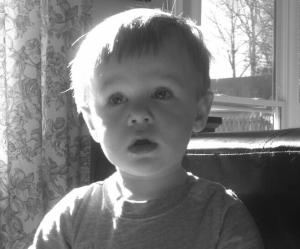 When she tells me this, my emotions go from totally ashamed and embarrassed (How could we have done this to my sweet little baby?  We try so hard to model good behavior and look at what is happening!)…

…To shear concern (What do you do when he does this?  What advice do you have so that we can appropriately address this behavior without making a big deal out of it?)…

…To angry and defensive (How long has this been going on?  Why are you just now telling me about it?  I am sure there is some other kid in here who is teaching him this word?  Are you calling me a bad parent?).

When I leave daycare, I immediately call Matt to let him know that I was just called out by a 21 year-old about what a bad parent I am.  He goes immediately to angry and defensive (skipping emotional levels 1 and 2).

Matt:  “Every day, they all tell me about what a great day Noah has had.  They go on and on about how well he plays, how well he eats, how much he learns and sings.  Now, we are bad parents?!”

Me:  “Well, we did hear him say it this morning.  We know that he is actually doing it.“

We then went on to make a plan about changing the movies and TV shows he is watching and what disciplinary approach we were going to take to address the foul language in the future.

But man, not feeling too great about modeling good behavior right about now.

Also, if you happen to have a child in Noah’s class and he or she begins to mimic Noah and say not-so-nice words, I’m sorry.  We’re working on it.