← Embarrassed, Ashamed, and (a little bit) Defensive
Something smells like poop… →

People constantly keep telling me that Noah is “all boy” and there really isn’t a better way to describe his infectious little rough-and-tumble attitude. I never knew that raising such an enthusiastic and undeniably rambunctious boy would teach me so much about how much I didn’t know about boys.

Before becoming a parent, if you had told me that boys and girls are just inherently different, I would have told you that you were lying. I would have gone on and on with what my Women’s Studies professors told me about socialization and gender misconceptions and nature vs. nurture research and data. It would have taken a lot of evidence to convince me otherwise.

Well- Noah is all the evidence I needed.

He completely encompasses everything that you have ever read or heard about little boys. He is so physical and energetic, dirty and slimy, squish bugs and dive head first enthusiastic about the world around him that he can’t even contain the excitement sometimes. The other night, I spent 12 minutes (and yes I was watching the clock) looking at and discussing the enormous spider that builds her web outside on our porch every night. After rushing to stop him from grabbing her (and then probably immediately putting her in his mouth), I had to explain about 4 different ways why we can’t touch her and why we have to leave her web alone and why it is not okay to scream at her or squish her. He was so excited and red faced that he could barely catch his breath to get all of his questions out. And trying to explain all of this to a 2 year old takes quite a bit of patience for someone who really just wants to be far, far away from the spider.

But, spiders aside, Noah has taught me more about everything I didn’t know about boys than I could have imagined. In case you have sweet, gentle, princess-like little girls at home, here are some things you just have to know everything about. 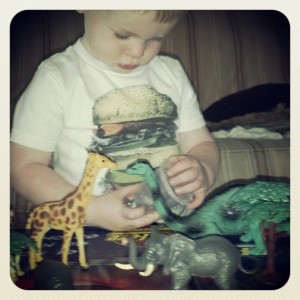 Oh my goodness! If only I had paid more attention in elementary school when we learned all about the different dinosaurs, I might be a little more prepared. So far, we have had 2 dinosaur themed birthday parties (reminder- Noah is 2). Noah can name 5 different types of dinosaurs. We carry the dinosaur toys around and insist that we take multiple dinosaurs to bed at night. He makes them fight each other and eat his cereal and almost all of his t-shirts have some kind of dinosaur on them.

Then, we bought a membership to the aquarium in our home town and now, all we can talk about is sharks. He runs around the house with his hand on his head like a shark fin. He now wants to wear shark shirts all of the time and occasionally alternates with the dinosaur t-shirts.

Trucks, Cars, and Motorcycles
I don’t know if it is in his DNA but he has been driving his toy cars and trucks around my house since he could sit up by himself. He takes his cars and runs through the house driving them on every surface he can reach. He shouts out from the back seat every time a big tractor trailer truck drives by and, watch out if we pass a motorcycle because the excitement just about explodes from his car seat. He got a battery powered Batman four-wheeler for his birthday and we actually have to keep it hidden most of the time because he cannot do anything else when he knows it is around.

And speaking of Batman…
Batman
Personally, I am a Superman fan. He has just always seemed so much cooler to me but, then again, I am a girl. Boys love Batman. I can’t explain it. It might be the dark mask, the cape, or the Bat-mobile or probably a combination of everything. His first real complete sentence was, “I’m Batman!” 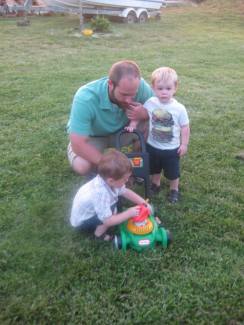 For my nephew’s birthday, the universe intervened and 2 people got him the exact same toy lawnmower. This was the perfect bit of mistake because it meant that both my nephew and Noah could play, tirelessly and all night long, pretending to mow the lawn. I mean, those boys mowed the lawn until their heads were dripping wet with sweat. We also have to slow down every time we pass any kind of construction or big equipment on the road and that boy can already work a drill, a screw driver, and a vice grip. He has also been known to want to take his wrench to bed with him… you know, for those late night projects.

I grew up in a house full of women. My mom, sister, and me were not girly girls or princesses but we certainly didn’t care one bit about tractors or dump trucks. My friends who have girls are often amazed at how physical and courageous Noah is. They talk about how cautious and gentle their little girls are. At Noah’s soccer party last month, my best friend’s oldest daughter spent most of the party dancing like a ballerina in the middle of the soccer field. It was awesome!

Noah has helped me to see that life will never be what I expect it to be and no matter what I think I know, I have so much more to learn. I have had to adapt to boy-stuff, learn to wrestle and jump blindly into adventure, and always keep a well-stocked first aid kit nearby at all times. I always had this idea in my head that I would spend years teaching Noah so much about life… I just never knew he would teach me so much so fast.

← Embarrassed, Ashamed, and (a little bit) Defensive
Something smells like poop… →