← A different kind of parenting
This is my life →

An unwanted lesson in patience

We have been having, what some might call, “behavior issues” at my house lately and I may have referred to my son as an “ass-hole” on more than one occasion.  Whatever.  I’m not perfect.  You might have called him something much worse if he had taken all of his little Hot Wheels and, one by one, thrown them at the windows, the walls, and at your face in a furious temper tantrum because I asked him to say “please.”

Rather than scream and yell (like I really wanted to), I proceeded to gather all of the toys that he was throwing across the room and all other toys that he had access to, put them into boxes, load the boxes into my car, and drive them to our storage unit down the street. 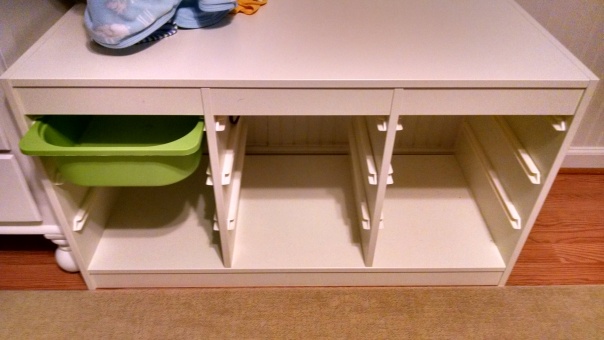 Matt stayed behind to monitor the tantrum that was happening next to the “time out” chair.

I get it.  He’s 3.  He has emotions that are bigger than his communication skills.  He is frustrated and has little to no control in his life.  I get it.  What I don’t get is why he has to choose the hardest, pointiest, most projectile-shaped toys to throw (in perfect spiral form I might add) directly at my face.  Not cool kid.

So, now Noah is currently working on his behavior to earn back the toys that were taken away.  I have discovered, however, that taking away actual toys just makes him turn regular household items into toys.  He played with a paper towel roll that he pulled out of the recycling bin for almost an hour the other day.  As long as he doesn’t pelt it towards my face, I’m okay with it.

With this terrible behavior in mind, and knowing that, overall, he is pretty awesome, he has had a few rare moments over the past week where he has been an absolute pleasure to be around.   There have even been a couple of instances where I felt slightly guilty for taking away ALL of the toys (then I look down at the giant bruise on my arm where Ripslinger, the air plane, was thrown like a ninja throwing star directly at me and the guilt disappears quickly).

The other day, after picking Noah up from school, I needed to run a few errands.  Noah was excited about the errands, held my hand in the parking lot without throwing his body onto the pavement in refusal.  He even got in the cart without arguing or stiffening his whole body as to not fit in the child seat.  It was a very enjoyable shopping adventure.

Because I am a huge believer in rewarding good behavior, I told Noah that he could pick out one new toy from the store because he had acted so nicely during mommy’s errands.

Now, this is no small thing for Noah.  He takes decision making over toys very seriously.  He scanned the isle, inspecting each toy.  He asked me questions about usefulness and batteries.  He finally settled on a rubber snake that, based on the picture on the front of the package, grows to be over 4 feet long when you put him in water. 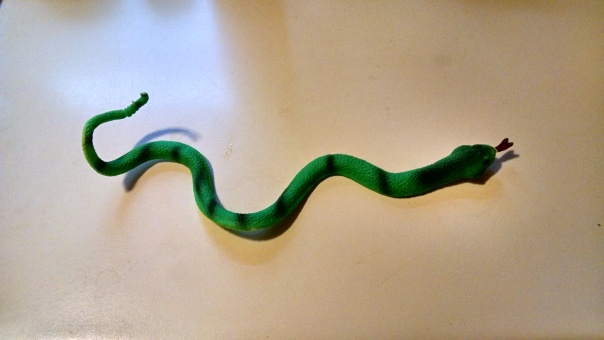 I loved this toy because it provided me with even more parental motivation.  When we got in the car, I reminded him that good behavior has to last through supper in order to take the new snake to the bath.  Bought me a few more hours of guaranteed pleasant.

Noah’s behavior was excellent through supper.  He even waited patiently at the table for Matt and me to finish our food and clear the table.  He darted upstairs ripped his clothes off and climbed into the bath tub.  He shoved that green snake into the water and…nothing.  The snake got a little slimy and sunk to the bottom but, overall, he stayed the same size.

Matt made up some excuse that he will grow eventually but, you could tell, everyone was disappointed.  After bath time, I rummaged through the trash to find the package the snake came in and it said, in the tiniest of letters on the back of the instructions:

“Snake may take up to 5 full days to grow. Keep snake submerged in water to maintain full size.”

Now, we get to have a long talk with Noah about what it means to be patient. 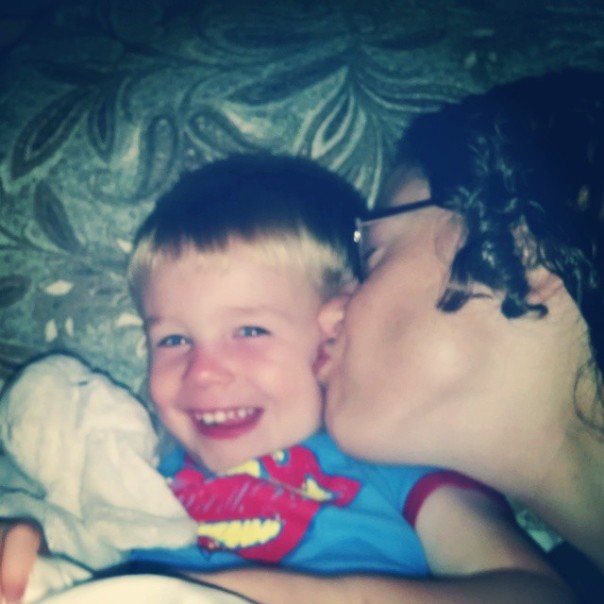 ← A different kind of parenting
This is my life →